The University of Vermont has released its non-conference schedule for the 2012-13 season.

UMaine reportedly has received a verbal commitment from Shaun Lawton of Putnam Science Academy in Putnam, Conn. Lawton is a 6-foot-5 combo guard and a native of Harlem, N.Y. He plays in the same summer basketball league as University of Maine sophomore Xavier Pollard.
Posted by Dan King at Friday, April 27, 2012 No comments:

Black Bears Pit hands out its awards after the conference tournament. There is no more important event during the mid-major basketball season than the league tournament, so how a player performs on the biggest stage can make a huge impact on my personal ballot.

The selection for Player of the Year is Albany's Gerardo Suero, a 6-3 guard. He was spectacular at times during the tournament and led America East in scoring. He scores easily in a league where buckets sometimes feel like a root canal. He slashes, he spins and he's got a knack for getting to the spot for rebounds. He's the best talent in the league.

Rookie of the Year goes to Hartford's Mark Nwakamma. The 6-6 forward used the tournament as a springboard. He's been a key player during the Hawks' recovery from an abysmal non-conference record, but his performance during the tournament served notice to the rest of the league. He can rebound, he can defend and he's not afraid to take a big shot.

Stony Brook's Steve Pikiell earns the Coach of the Year selection. He's got the Seawolves back in the title game after winning the regular season title. After a look at his roster and its performance last weekend, Stony Brook has the feel of a consistent contender.

For the rest of the Black Bears Pit honor roll, check out the sidebar to the right.

When perusing the Black Bears Pit honors, there's a name conspicuous by its absence: Gerald McLemore.

McLemore, a senior captain and UMaine's leading scorer, came down with an illness early in the week and was unable to play. He didn't make the trip to Hartford. In all the years of following America East (and many of those in attendance were buzzing about it), nobody could remember a player who, despite injury or illness, did not at least attend the conference tournament. There are always exceptions, of course. Evidently, this was one.
Posted by Dan King at Thursday, March 08, 2012 No comments:

On our drive back from the America East tournament, the topic of who was the last link to a Black Bears' win in the postseason was a topic of conversation.

As a trivia question, it would read: In what year did UMaine last have a player on its roster who was part of the 2005 quarterfinal win over Boston University and who was the player or players?

According to our research, it came down to a single player who was on the 2008 roster. Drum roll please ............... Jason Hight, the versatile former walk-on guard from Westbrook.

Another research topic? What school holds the America East record for consecutive tournament losses? Not sure I want to know.
Posted by Dan King at Thursday, March 08, 2012 No comments:

Quarterfinals
Stony Brook over Binghamton
New Hampshire over Albany
Vermont over UMaine
Boston U. over Hartford

Seminfinals
New Hampshire over Stony Brook
Boston U. over Vermont

America East has released the bracket and game times for the upcoming conference tournament. The Black Bears will play Vermont 6:05 p.m. March 3 in the first game of the evening quarterfinal session.
Posted by Dan King at Sunday, February 26, 2012 No comments:

Stony Brook 55, Black Bears 48 ... Seawolves fight off UMaine for regular season title and No. 1 seed. Black Bears will be the No. 7 seed and take on No. 2 Vermont. 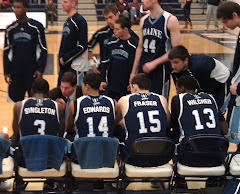 Dan King
Fan of UMaine hoops since the late-'80s. Francois Bouchard would be the No. 1 draft choice on my personal all-time Black Bears team. Have attended every America East Tournament since 2000 with my brother-in-law, Steve. We are interested in all things Black Bears basketball and America East. * This blog is not affiliated with the University of Maine.

Some day, UMaine basketball will have a home of its own. And it may look something like this. At least that's the plan.